My DBIL is a keen Ducati lover and rider and he celebrated a big “0” birthday in April with friends and family.

I had been racking my brain what I could do for a present that was a bit different.

Then I started to see some patterned mens t-shirts about and was seeing a lot of fabric printed at Spoonflower and an idea started to formulate.

My BIL loves to wear t-shirts and also likes to have a pocket, which most RTW don’t have, so after making 2 Strathcona Henleys for Mark, I decided this is what I would do.

I found a picture of his 900 SS Darmah and then used the feature in PowerPoint to “remove the background” and with a bit of fiddling I had a pretty clear black and white jpg of this bike.  I uploaded it to Spoonflower and chose a half-drop layout and then ordered a sample in their Organic Cotton Interlock Knit.

This arrived just before Christmas and gave me time to think about exactly what I was going to do. So at the end of February I ordered the Ducati fabric as well as a metre of the plain Organic Cotton Interlock knit in case I wanted to use it on the Henley.

Now this is where I had a bit of a shock, the sample I received the bikes looked like this 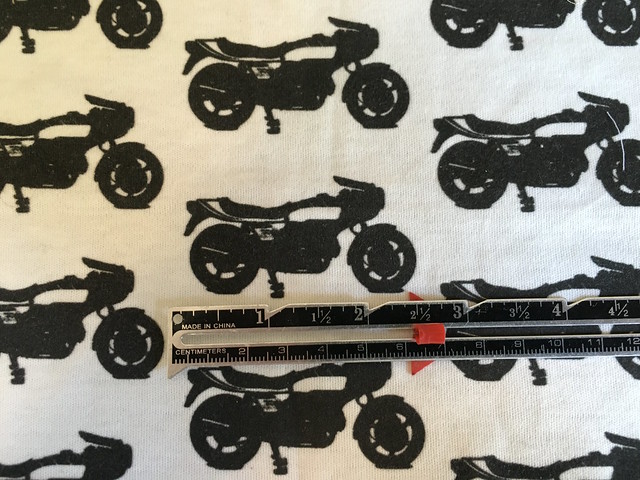 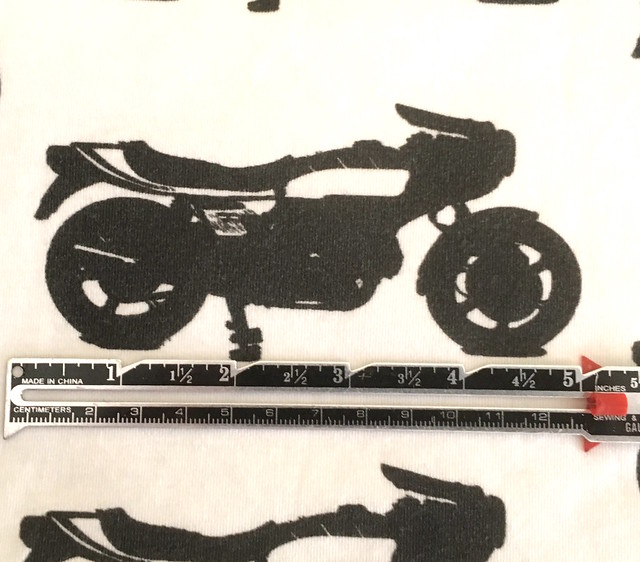 I did pop back onto Spoonflower to double check what size I had chosen, and it was the 5″ size.  I completely forgot to the check the size of the bikes on the sample because if I had I would have reduced the size of the bike to 2.5″ only if I could have spaced them out a bit more.

Now I wasn’t sure if this would look like a t-shirt or a night shirt but I decided to go keep going.

It did take a bit of head scratching to cut it out, Roscoe was locked outside and the fabric was spread out on the floor so I could get a better idea of the positions.  I soon realised that I would not be able to pattern match the sides so I decided to have a 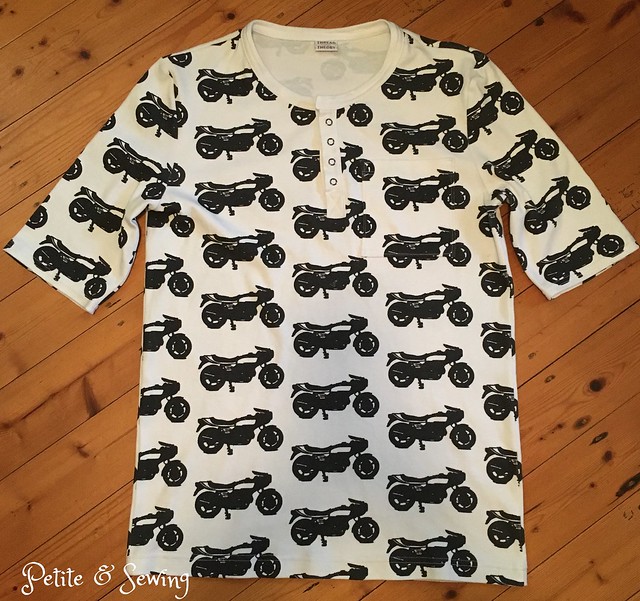 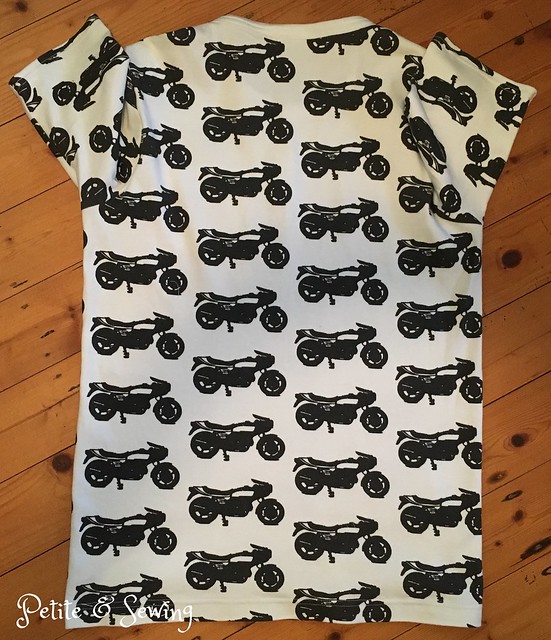 The first thing you do is the placket, so I chose to use the white organic cotton interlock knit for this and it went together very well with the help of the Olfa Rotary Point Cutter. 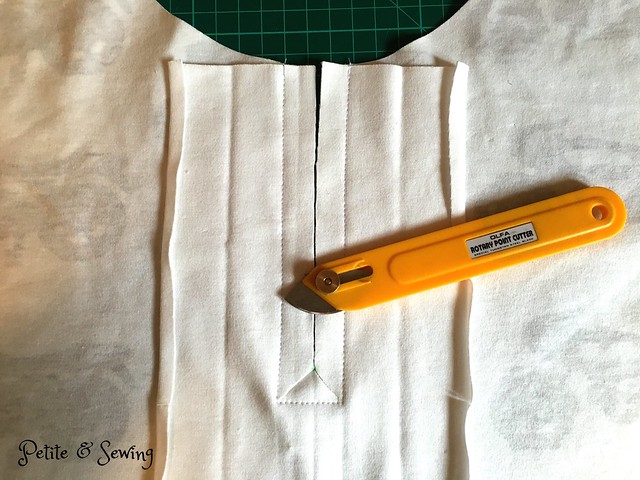 Next up was the pocket.  Now I wanted this to be invisible so I traced of a pocket pattern 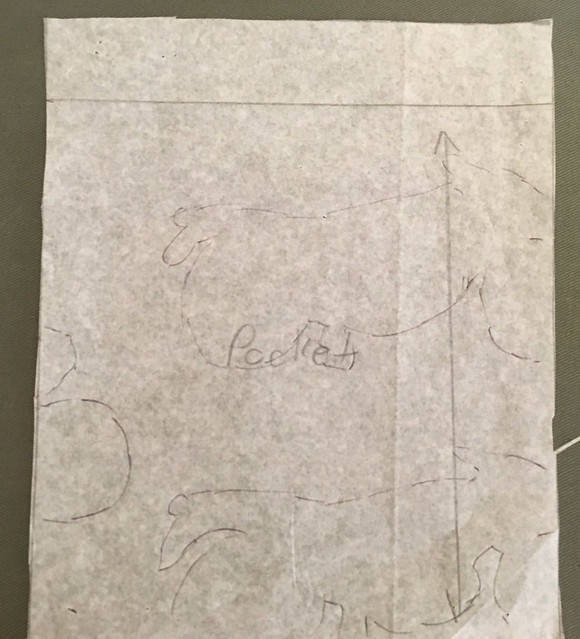 and then laid it on the fabric to get the design and placement correct. 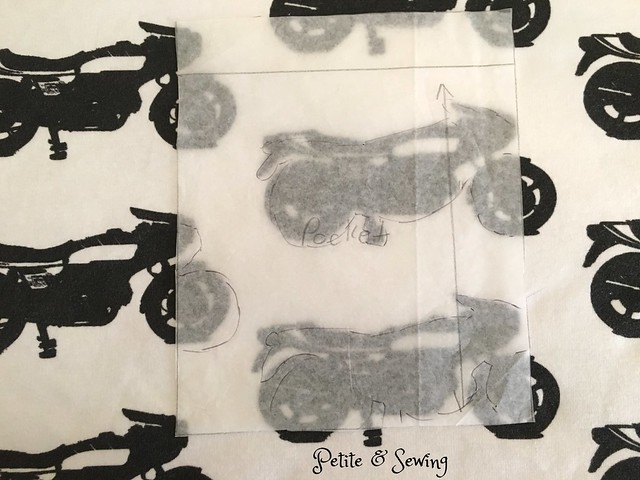 I’ve never installed a knit patch pocket before and found this great tutorial over at Seamwork.

Next the shoulders and then the neckband.  I have tried the method that Thread Theory suggests but I just don’t like the overlocking on the neckband and this is the way I did the neck band on Mark’s but didn’t document it.

I sew the ends of the neckband together as per the instructions, but that is where it stops. 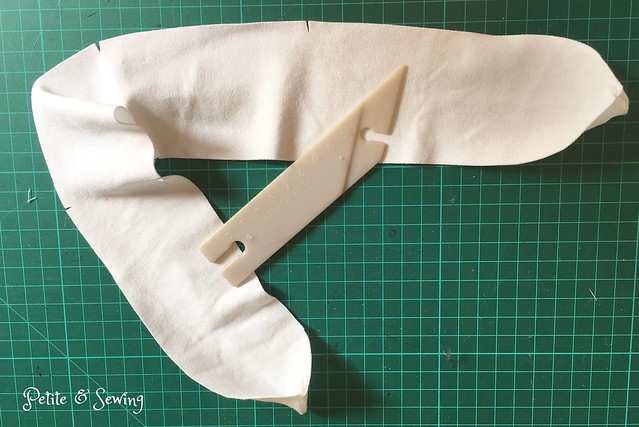 Then I pin the neckband to the neckline like this, and sew it in place. 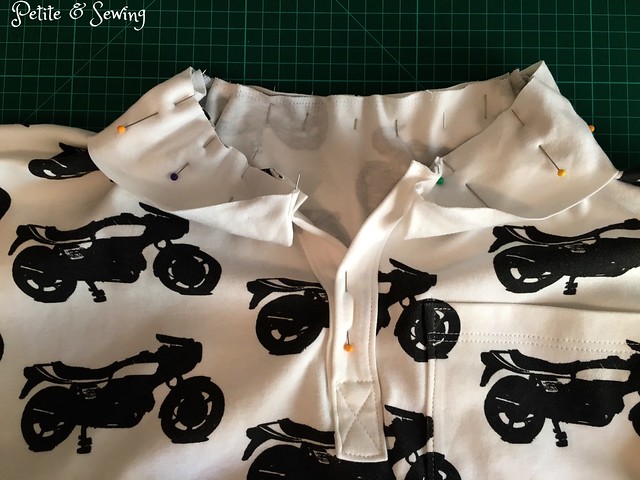 Then I turn under the other neckband edge and pin in place and handstitch this in place, remembering to add the label.  Thinking about this it is like attaching a waistband.

The final step is to add some twill tape to the inside neckband just like RTW and I did this for Mark’s Skiing Henley but found more information over at Baste + Gather and her T-shirt Neckline Twill Tape Tutorial. 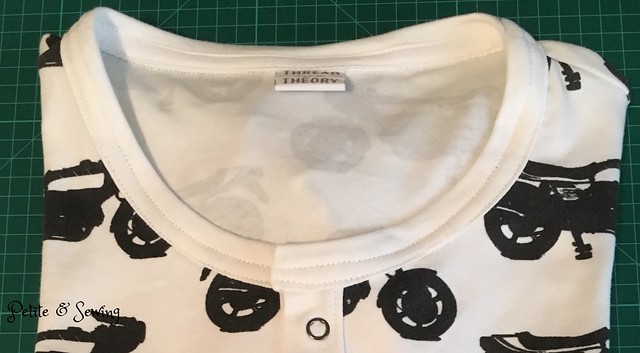 The rest of the t-shirt went together very smoothly.

My final decision was what I was going to use on the placket:

The snaps won and I got to use my new toy, the DK-93 snap press which you saw happening here!
The problem with a surprise gift and your sister telling you not to make the t-shirt because you are so busy, is the Henley was a bit too tight for my BIL’s liking, it did fit him and in fact it is the best fit across his shoulders he has ever had but it was just a bit too close fitting for him to be comfortable in.

So it came back home with me so I could adjust the fit.

Luckily I had some left over fabric and manage to cut out two side panels of  8cm width that ended up in a point into the sleeve hem.

And look at this cool card I found when we were in Canada! 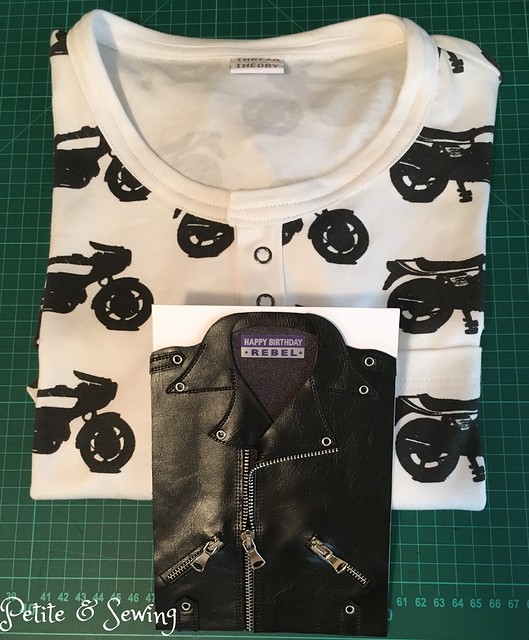 When he opened his parcel he thought I hadn’t done anything to his Henley until my sister showed him the pattern matching at the front side seams. 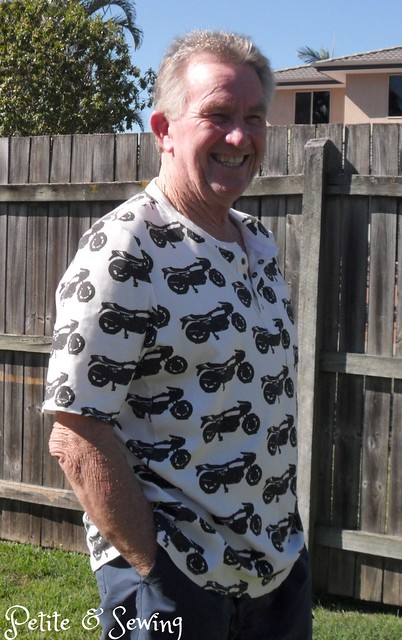 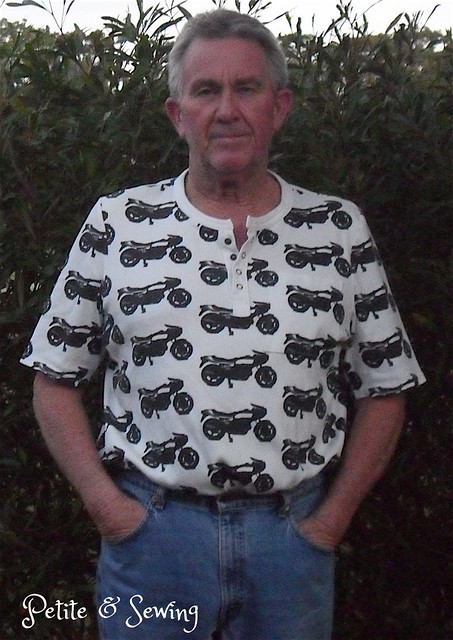 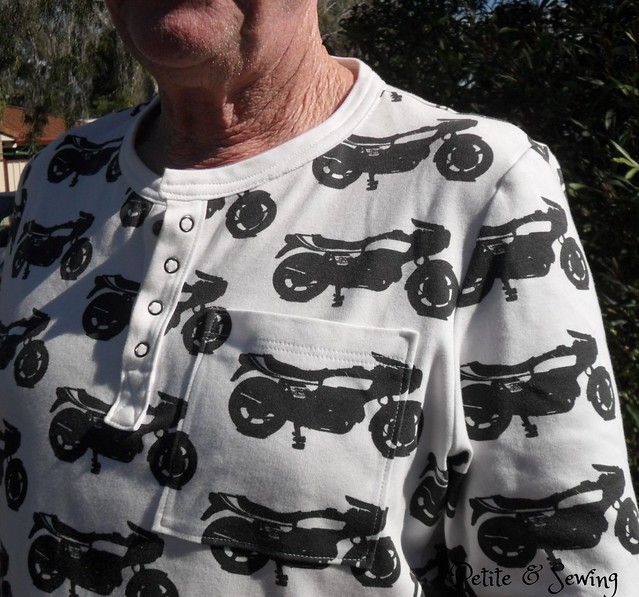 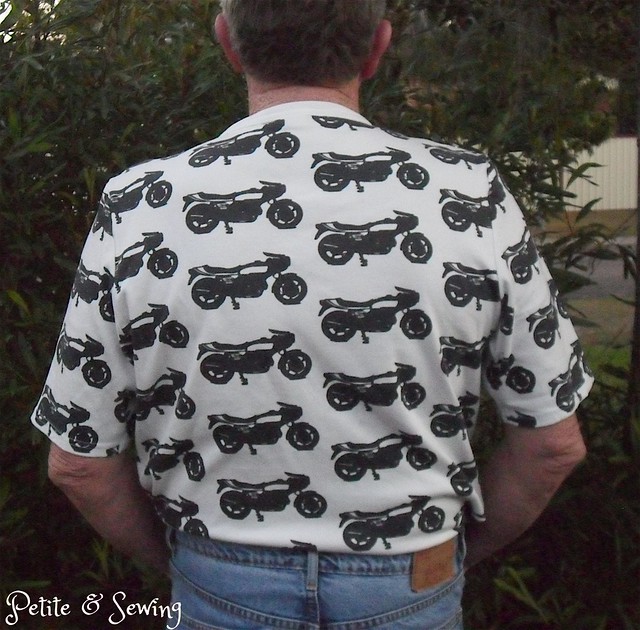 He is very happy with his Ducati Henley.

10 thoughts on “A Special Birthday present!”